Shih Tzus are one of the happiest fur creatures on earth. They are full of love and those beautiful tails seldom stop wagging. You will notice a little bounce to their gait that is truly delightful. They live for your companionship and do their best to please you. The Shih Tzu personality is affectionate, outgoing and playful. As a family pet they are ideal inside residents. Shedding is mild to none so you are not glued to the vacuum to keep your house clean. If you are thinking about a new furry family member you will want to consider one of these gorgeous babies. You will love their silky thick coats that come in so many colors and markings. They have eyes that will melt your heart and love that will sustain you throughout their lifetime.

We do not have exact information on the Shih Tzu breed but the following historical accounts are the most widely accepted belief of when and where these beautiful animals originated.

Documentation and artistic representations of Shih-Tzu-like dogs are found dating back to A.D. 624, although the breed’s introduction into China most likely occurred many hundreds of years later. It is well documented that they were favorite house pets of the Ming Dynasty (from 1368 to 1644), and then in the mid-17th century, dogs were brought to the Chinese court from Tibet. These specimens proliferated in the Forbidden City of Peking for hundreds of years, evolving into the modern version of the Shih-Tzu. The breed was so revered that long after trading with the West was established, the Chinese refused to sell specimens of the breed to outsiders, or even give them as gifts. After the communist revolution in China, breeding of any pure breed virtually ceased and the Shih-Tzu was nearly extinct. Several of these individuals were exported to England in 1930, saving the breed from extinction.

It has been said that American Soldiers stationed in Europe and Australia brought the breed back with them to the U.S., paving the way for the Shih-Tzu to be accepted in the American Kennel Club in 1969.

**The breed history, paragraph two, is included with permission from the American Kennel Club.

Shih Tzu dogs come in an amazing array of rich colors with all colors considered good and equally desirable. Puppies can be born with a solid coat of hair, a combination of two colors, or a mixture of three colors.

Liver is confusing because it is the color of the points (the dog’s nose, eye rims, pads, and lips and not the actual coat color). That means the dog must have brown or liver pigmentation to be called “liver.” You will see liver dogs that have coat colors ranging from white to deep chocolate. Sometimes the liver colored dogs will have green (or human like) eyes in contrast with the deep brown eyes and black pigmentation you see in other Shih Tzus.

Blue can be confusing too. A true blue Shih Tzu will have a blue nose, but can have other colors of hair. The color ranges from white to dark charcoal and is often difficult to see indoors. It is best to go into the sunlight to see the blue because at a distance it can appear to be black.

There are seven varieties of colors that contain Two Color Combinations, a white with another color:

Shih Tzu dogs can also have a three color combination:

Black Mask, Black Tipping, Dobie Markings, and Eye Stripes. (Eye stripes are dark shading from the corner of the eyes that resemble an eyebrow).

It is not uncommon to see a color marked on the AKC paperwork for a young puppy that is completely different from the adult coat color. The way you can tell if a puppy’s coat is going to fade is by checking the undercoat. This is my little Redman as a baby and as you can see he was a solid red. Then as he grew his coat started to lighten. I knew he would be a cream adult (like his daddy) and that is what I wanted so no surprise. However, his brother remained a strong, solid mahogany red that is gorgeous as well. So many reds to choose from and some are very rich, deep and beautiful while others are light even resembling strawberry blond. 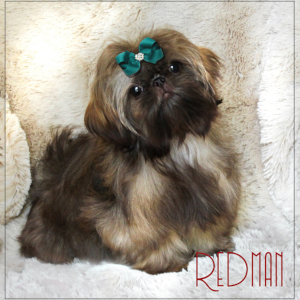 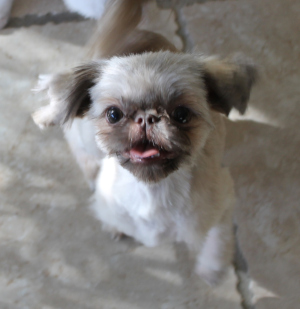 There are numerous descriptions of the way colors fall on the coat. Here are just a few: 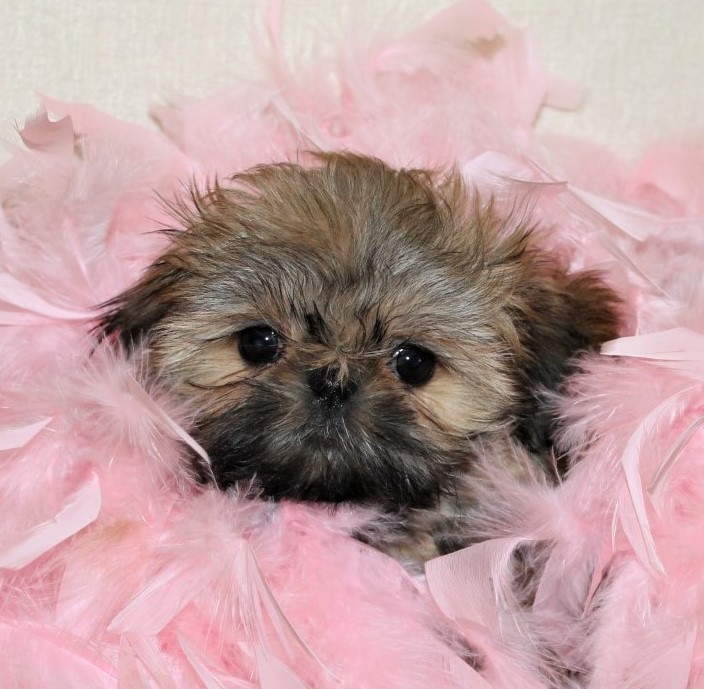 For more information, you may call, text or email me directly at: